The MoMB just crossed the 5555 betas mark (the 5555th app listed is the super sharp Ameritocracy.)

As most of you know we focus on plain vanilla public betas (77.7%). But we also collect sites in alpha (4.9%), sites which have not publicly launched yet (private alphas, private betas, sites in stealth mode, …) and require some sort of invitation to get in (15.7%), or sites which come in some other beta-ish (gamma, zeta, feta, …) flavor (1.7%).

Google has launched only 2.6% of all betas,

but they still lead the pack compared to Yahoo, Microsoft and others. 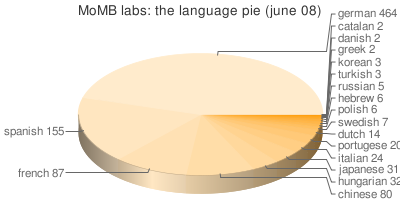 We’ve listed sites from 25 languages, about one out of 12 betas is in German.

Interestingly enough only 185 sites (3.33%) have been formally released (i.e. dropped the beta tag) and only 62 sites (1.12%) have gone out of business and entered the deadpool. I try my best to update the status of sites and I definitely missed a few, but even if you triple the numbers more than 90% of all sites remain in perpetual beta and only a handful of sites just die.